Yesterday, Friday, was a pretty normal Friday. SWMBO and I went out to Family Pancake House for brunch. I had the Halibut burger and it was pretty good. Then we went to Costco and bought $230 bucks of stuff! Actually, a large part of that was a heating blanket and a set of sheets for the new bed. (Damn Sheets Are Expensive!!) That was probably half of what we spent. The rest was for stuff to feed "The Mouth" living out back! (

Just Kidding!) The rest of the evening was spent as usual. Except…

One of the sisters called me and said that a bunch of folks from church were getting together Saturday morning (@ 0530!) to drive down to Chehalis, WA and help folks that were flooded out. At first I said NO; but got to feeling kind of guilty about it as we came through the storm fairly well off. So I called her back and said I’d be there. Then I spent the rest of the night getting stuff together to take. Both my shovels, rake, water, sammiches and snacks, hammer, ladder, pry bar. All the usual stuff. Then I took my sleepies (Great Night Sleep herbal sleep aid) and crashed around 2200.

Got to the Gig Harbor Stake Center at 0515 and, of course, I was the only one there. Luckily by 0550 or so another 12 people showed up. We had a nice little caravan down to Chehalis. Met at the Stake Center there, was issued bright yellow shirts, given our area and turned loose. When we got to our assigned area, the guy that was "in charge" had us help a couple of folks move the gravel in their yards around; which I thought was not what we were there for. I’m thinking we need to help the people that have quality of life issues. So I learned where folks might REALLY need help and took off. I saw a lady with a bunch of stuff piled up next to her porch (where the city won’t pick it up!) so I stopped. By the time I got out of my truck the other guys stopped behind me. I asked the lady if me and some friends of mine could move all that stuff out to the curb for her and she almost started crying. So we moved the stuff out to the curb. Went fairly quickly with 10 of us doing the work!

Around the corner from this place was a whole street of houses that had been flooded. We started at the first home ripping out carpet and piling it outside and moving soaked furniture and stuff outside and worked our way down the street. Lots of shoveling mud! Lots of furniture moving out. Lots of work. Almost everyone was really appreciative and emotional about 12-20 strangers stopping to help them with whatever needed to be done and not asking to be paid. Cool!

The first folks (old folks) we helped around the corner told us about standing chest deep in water and being picked up by a helicopter. The lady said "Yeah, I climbed into the basket and it kept going up and down and up and down and dipping back into the water and the wind was blowing and it was raining like crazy and that SOB made me put out my cigarette before he’d let me in his helicopter!"

My throat got really raw and I was soaked to the skin by 1300 so I called it quits and drove the hour+ back to the house. Got home, restarted a fire to warm the place up, stripped the wet muddy clothes off and climbed into a shower. ’Bout a half hour later I was starting to feel warm! Layed down on our new bed until SWMBO got home from the genealogy library. She’s making dinner tonight. Making me some fish! Cool!

It was a hassle; going to bed early (and missing Dogfights), getting up early and driving an hour+ before zero dark thirty, shoveling mud and lifting soaked furniture and stuff; but it was kind of nice. You see a house with water marks just above the bottom of its windows and you know you need to stop and help. 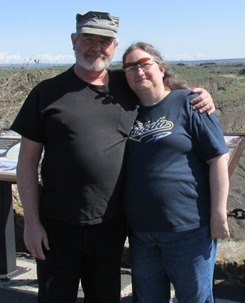