Comes on of a sudden and I can barely walk. I don’t remember injuring it and the only thing “unusual” I’ve done lately is drive for 3 days. SWMBO said something about Deep Vein Thrombosis and wants me to go get it checked out. Pain hasn’t happened today (so far but it’s early) so I’m kind of iffy about going to the Urgent Care place here in town. Not to mention the expense! (So much for “free” medical for the rest of my life.)

Other than that it’s too early for anything to be going on. One of the hazards of being Old and Retired. Should get off my fat old ass and fix myself some

New WebCam came in today and is already hooked up to this Windows 7 VM and Skype installed. It works pretty good. At least as far as the picture goes. Now to add my Uncle (and SWMBO) to see if it is really going to work well. 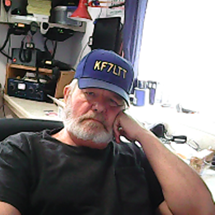 Keep meaning to get off my ass. Worked on the hole I’m putting in the wall some. Got the hole and stud completely cut out. Time to cut the wire, but, I ain’t doing that until SWMBO is going to be home “just in case.” I’ve been bitten by electricity enough times to know it can kick your ass when  you least expect it to. I want someone around that knows CPR!

Decided to take the easy way out for dinner: Fried Tilapia (in bacon grease!) on a bagel and real crispy french fries. (Not those limp noodle POS fries SWMBO likes.)

Been uploading our pictures to Google Drive manually since none of the “apps” seem to want to do it. In Linux or Windows. They do the directories just fine; they just don’t upload the pictures in the directories. Ah well.

MCARC 10-meter Tuesday Chat Net went well. I actually heard half the others!