Four in all. But I didn’t stay up very late either. Just too old and tired and too used to getting up early and going to bed around 2200 or so. Think I’ll make a concentrated effort to stay up tonight.

Except I woke up with a damned migraine this morning. Got up for a few minutes but felt too bad, so I got my head-freezer thingie and laid back down. Woke up again at 1000! Man! Most of the headache was gone but it’s kind of hung on all day. So I haven’t really felt like doing anything. One of these day’s I’ll learn not to eat a chocolate donut hole late in the evening! (It’s a trigger.)

And since it’s Monday, SWMBO’s lunch with the girls day, I don’t have to cook dinner tonight. Thank Goodness! So I had a Hot-Pocket & Tater Salad. I may put in a movie later and add some popcorn to that daily intake list I keep meaning to start.

Not much else going on. Did the usual: watered the garden. Went for a walk. (Nice Wx for it!) Almost did some laundry. (Well, I did switch it from the washer to the dryer.) Flew around some south Pacific Islands in MSFSX. (They need to put a helo or two in the flight simulator in Google Earth! Better scenery.) 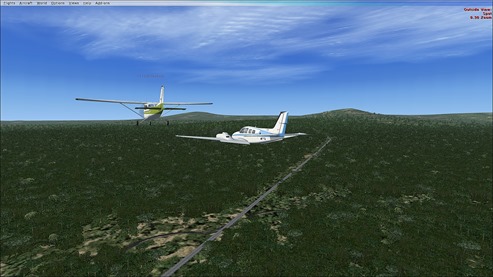 Well, gonna try to stay up and see if there are any more meteors tonight. Still have that damned headache though so I don’t know if I’ll make it or not…