Itâ€™s pretty â€œnormalâ€ around here so far. Cloudy with some sprinkles. Doing my morning absolutions getting ready for the rest of the day. Got to run my friendâ€™s camera back to him over in Olalla and I want to get that done early.

Spent the rest of my day just doing the usual. Tried making a â€œscannerâ€ out of one of my film scanners to handle the big negatives we got from SWMBOâ€™s deceased Uncle. Worked but I need to figure out how to (re)focus the camera. I even made my own â€œlight box.â€

I was up early; something about sleeping in a tent, I guess. But I usually wake up early anyhow. Had to wait around until at least 0800 for the office of the Ennis RV Park to open so we could actually check-in and take care of the â€œrent.â€ Had breakfast and finished setting up anything we didnâ€™t get to before crashing the night before.

The drive (about 80 miles) to Yellowstone down Highway 287 was absolutely beautiful! The houses out there are actually far enough apart for me. Lots of really nice scenery with mountains and valleys and rivers. Saw Buffalo next to the road just north of â€œEarthquake Lakeâ€ and stopped to take some pictures. Went past â€œEarthquake Lakeâ€ and â€œThe Lake That Tiltedâ€ before turning right to head into West Yellowstone. 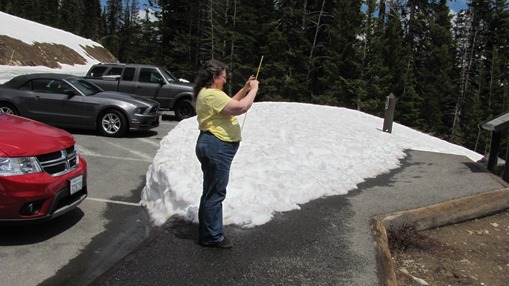 For some reason all the power was out in West Yellowstone so the Ranger at the entrance to Yellowstone was just handing out the fliers/info packets and letting people into the park for free. Too Cool!

So, we went to Canyon Village then took the Northern route to Tower-Roosevelt to Mammoth Hot Springs then back to West Yellowstone. Yes, we stopped and took a lot of pictures on the way! Yes, I had a great time! SWMBO got to take a picture of a bear! Cool! Saw lots of great scenery and drop-offs from the road (mostly on SWMBOâ€™s side of the truck). Saw way too many Buffalo and even managed to get some pictures of some Big Horn Sheep up-slope. Cool! Tower Fall was cool! 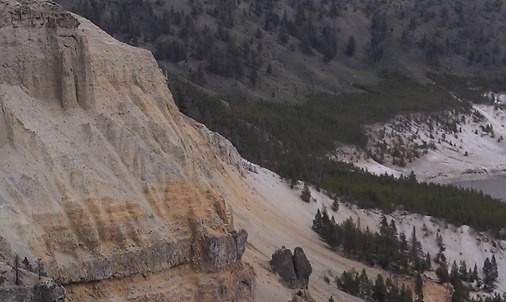 But, wouldnâ€™t you know, I got a headache. After Mammoth Hot Springs I just couldnâ€™t get into more traveling than we still had to do, so we cut it a bit short and headed back to the camp site. Still spent most of the day in Yellowstone so I didnâ€™t feel bad about just heading back.

So we went back to Ennis and just chilled for the rest of the night. SWMBO made some chicken/noodle stuff for dinner. She got to play with her genealogy on her tablet. I watched some videoâ€™s on Yellowstone Super Volcano on YouTube. We hit the rack about 2200 cause we were beat.

Mostly, day 2 was a success, for me. Seemed like SWMBO had a good time also; and thatâ€™s good. Except for the crowds it was pretty nice. Unless you had to use â€œstinky restroom!â€ Which we did. And, yes, it really stank. 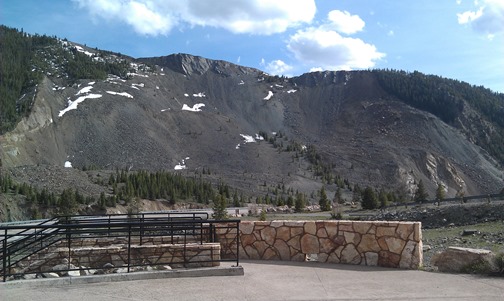 Stopped at the little museum thingie at Earthquake Lake on the way back to the camp site. Side of a mountain slid off into the old lake and, basically, cut it in two. Drowned a bunch of folks and flooded a bunch of folks out. I got pictures of the slide area. Lots of dirt moved there!

Wet Out. Lazy Day All Around