So SWMBO and I wound up getting out in it all anyway. Went to Staples where I bought her a wireless keyboard/mouse for her laptop and she bought herself a 8 gig usb drive. Then we went to Home Depot; 20 miles across town, and spent way too much money on Christmas lights and stuff. THEN to Lowe’s to look around.

And it really wasn’t too crowded out here in Port Orchard (the stores we went to) and the traffic really wasn’t much worse than usual. It was great being out with SWMBO and we even managed to stop for a bite to eat at the Teriyaki Chicken place. Fun!

Not much else going on around here. Snow we got has mostly melted and the rain has returned. Some wind tonight but not like that storm we had. Did I mention that we had a tree come down across our driveway? We did. Digger was almost too cold to work right and we, the neighbors and I, had to cut the thing into lengths to move it. Got it done though. Was COLD out there!

And that’s it for now!

Now I Feel Like Making An Apology Tour For The U.S.A. 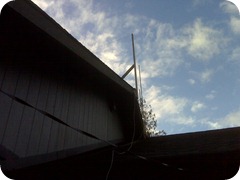