WHAT THE HELL HAVE I BEEN DOING? No idea. Except that it has been raining so much that it’s difficult for me and the Dog to get out for any walks. We have. And SWMBO even joined us on a couple; but it ain’t been very often.

Matter of fact, it has rained so much around here that we’ve had a couple of minor landslides around the area. And NOAA is constantly sending out “updates” warning of the saturated ground and to be careful. Been thinking of getting a little “saturated” myself lately.

SWMBO had two (2!) days off for medical appointments; so that was nice. We really didn’t do a lot but I did take her to Taco Bell for a taco salad the first night. Easier than cooking dinner myself. And probably cheaper.

Also got off my lazy fat old ass and started replacing some of the base molding in the kitchen/dining area. That was fun! Had to kinda sorta repair my nail-gun thingie (that’s real technical talk there, folks) and drag my compressor upstairs; but got it

done. SWMBO and stopped and got some white paint and filler stuff and she’s going (she says) to paint it all. (I won’t hold my breath.)

Took the easy way out and made myself a couple of “Roach Coach” style burrito’s for dinner. SWMBO had mentioned them the other night and I’ve had a hankering since. They was good.

Cool. Now we’re under a flood watch around here.

Dog and I picked SWMBO up at the QFC. We home. She’s eating and doing homework. Think I’ll go lay down and read a bit. 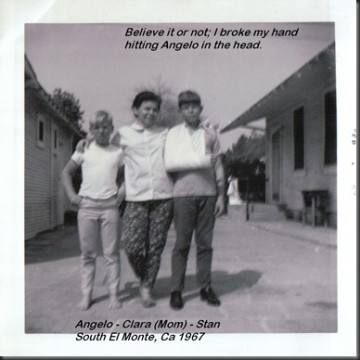