But there’s only about half an inch on our deck railing. This is what we’re looking at for the next few hours: 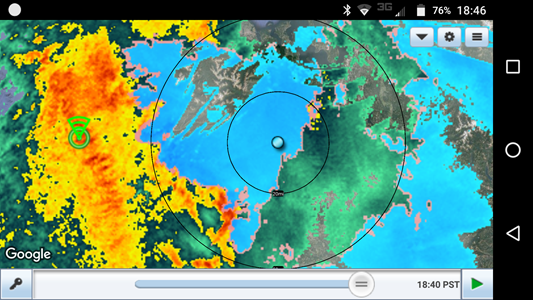 That circle-triangle thing is right near the WaRshington coast. Moving our way. FUN!

SWMBO and I went to Walmart so I could get a wall mount for her old monitor/tv that started working again. I swear I have no idea how I fixed it other than making sure everything was tight. But, it’s working just fine and makes a great 2nd monitor for my laptop. I can read everything on it! Woo Woo!

We also went to the Doggy Daycare thingie in Gig Harbor and met the new dog we’re trying to get. They think he’s a Minpin(?). Call him Wiz. Not sure I want to be yelling that out in the woods. 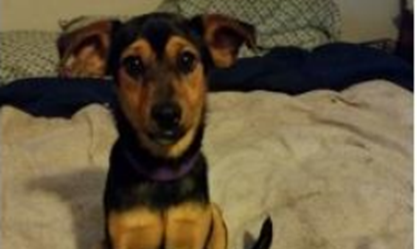 Not a great picture of him. He seems to be a nice dog. Didn’t really pay a lot of attention to us what with his foster Dad there, but I suspect that’s change once he’s here at the house.

Took SWMBO to the teriyaki place near COSTCO on the way home. Got home and she’s off sewing (and trying to make her room dog-proof) and I watched the Doctor Who Christmas special.

Oh, our Christmas went great. SWMBO’s Brother, Son and his girlfriend, and I. SWMBO seemed to like her presents (travel cases for her sewing) and she gave me a handmade TARDIS fleece jacket thingie. Nice! Her Son (and his girlfriend) also gave me “Doctor Who: The Vault” book with the history of Doctor Who. Cool! I let them both pick a sword and knife from my collection.

We all had a pretty good time. Stuffed ourselves on Ham and the fixins. They watched Christmas stuff and I played in here mostly. (Had to get away for bit. Was getting overloaded with noise and people.)

And that’s pretty much it at 1910 this Monday night. Think I’ll go gt a piece of cheescake.