Let’s see. How to write this up? Most people would find our weekend boring; but not me. I got to spend three days “cooped” up with my Schweetie in a strange place. Mostly cloudy. Mostly cold. Mostly windy. Sometimes wet. I got a lot of “radio” stuff and SWMBO got a lot of knitting into this weekend. Caravan worked out great. Took lots of pictures. Mostly just spent time with that lovely young woman I married almost 30 years ago. 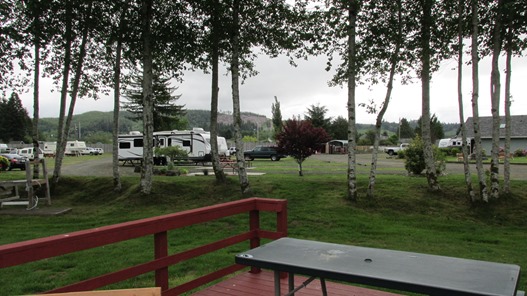 Stayed at the Hoquiam RV Resort in, Hoquiam, WA and it wasn’t as spendy as you’d think for booking at the last minute. Nice little place that stayed mostly empty. Liked the owners and the grounds. (The only thing I didn’t really like was that they don’t strike the colors at night and they’re not lit.) Owners were friendly as hell! Mostly just stayed around the campground Saturday just being lazy. I made some BBQ Chicken that was excellent! 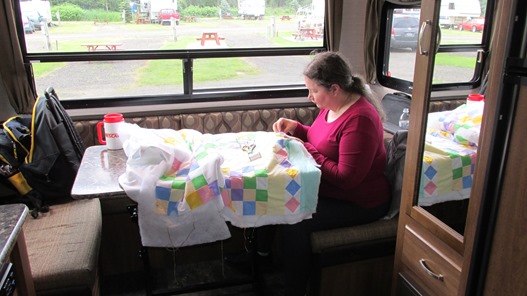 Sunday we drove over to Ocean Shores for a look around. It was your typical Western WaRshington Beach Day: cool. cloudy. windy. And the tide was out. Did see one girl in a Bikini (nice butt!) and a heavy coat. (Typical WaRshington Beach Attire.) Drove a couple of miles actually on the beach. SWMBO walked out to rinse the foam off her shoes and a wave got her wet up to her knees. Did a bit more driving around before settling in for the evening. 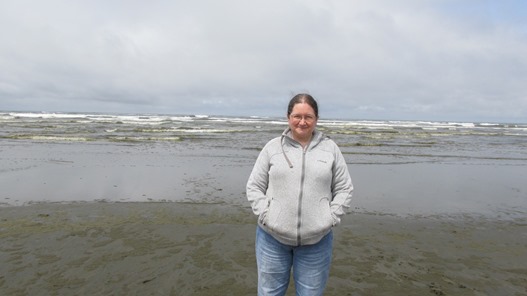 Got up early this morning (forgot to turn the alarms off on my Nexus 7), had breakfast and broke camp. Three hour drive home. Everything unpacked and put away. Trip to Safeway and SWMBO treated me to Taco Bell (the new one in town). Now we be just chillin’ for the rest of the night. 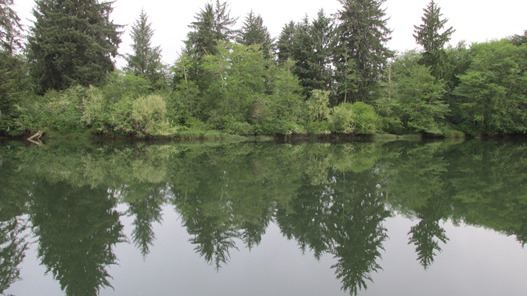 Except her (old) laptop (the one running Linux Mint) quit outputting to the monitor. Can’t get it to do anything but whirr at me. So we set up her (almost new) Windows 8 laptop and now she has two monitors. And 5000+ E-Mails she hasn’t downloaded in the past 6-8 months. (We never set up e-mail on the Linux Mint laptop for some reason. I think because she was checking mail on her phone and was happy with that. She likes to keep things simple. Hence marrying me.)

Plugged her Linux Mint laptop into my monitor and it came right up. Working fine. So she had me put it back in her room. Booted right up. Sometimes I just don’t understand computers. It won’t work. It will work. It won’t work. It will work. Make up your damned CPU! But it does crack me up that she prefers the Linux Mint laptop over her Windows 8 laptop. The Woman who likes to keep things simple. The User. The “Don’t Change My Computer Without Asking Me First” woman.

So. We took a camping trip. Had a good time. Got home safe. Back to routine.